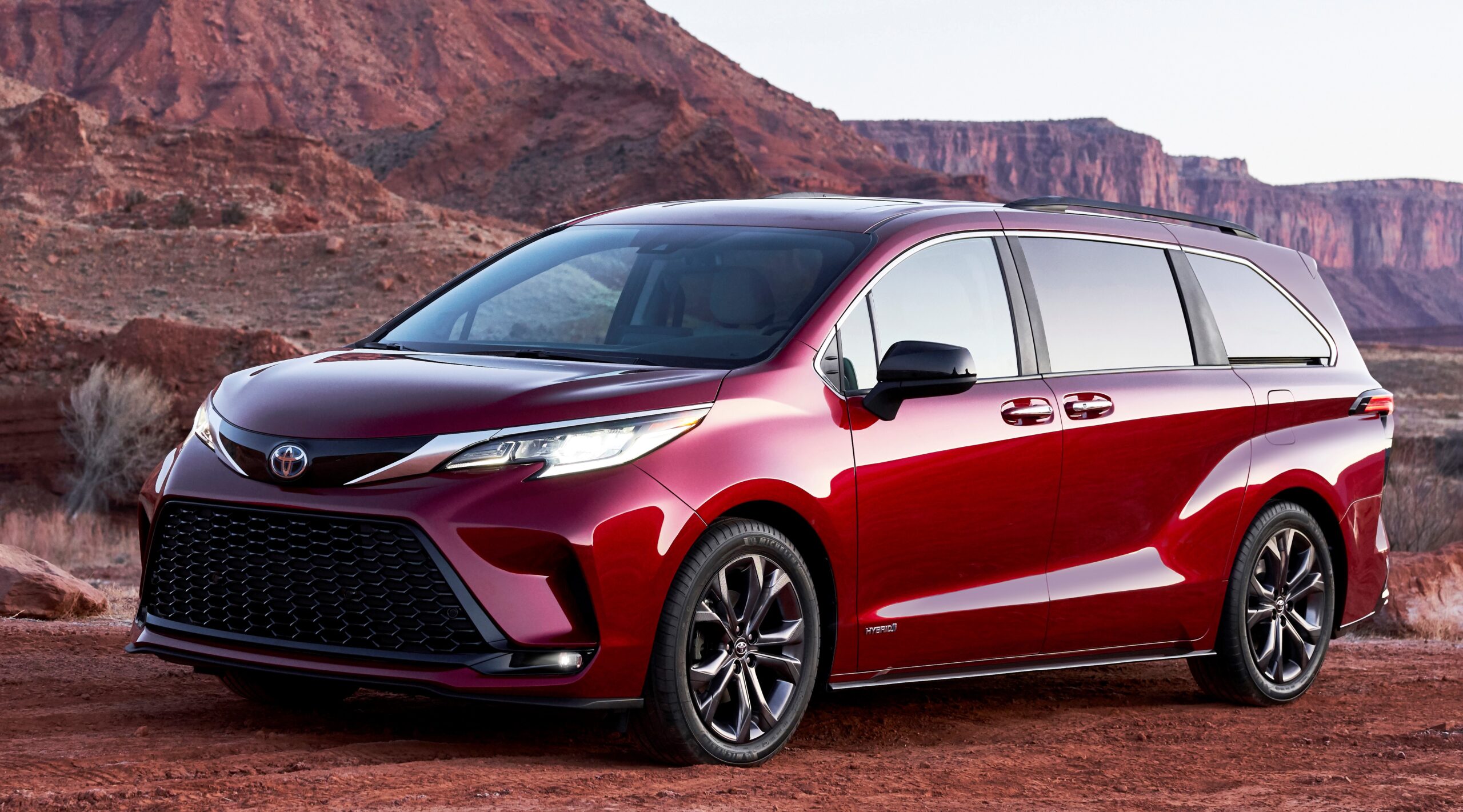 You can fit just about anything in a minivan — except an ego. These three-row people movers are the most efficient modes of transportation, yet ownership has been traumatized ever since the damning label of “Soccer Mom Mobile” was applied. It nearly killed the segment. Mention of the word brings polarized responses, like “hell-no never” to “make way for the welcome wagon.”

To spackle over the crazed aversion, manufacturers have long tried to offer sporty variants, which were usually received with a shrug and “Meh.” Anybody who wanted a van, didn’t need it to be cladded-up and those who didn’t want a van would not be tempted by cosmetic enhancements.

Despite the Sienna’s 17-foot-length, it drives “small” with a high seating position, low step-in height and big windows. (Toyota)

So those carmakers with struggling minivans sales dumped them, including Ford and GM. Today, there are just four 2021 minivan choices: the Chrysler Pacifica, Honda Odyssey, Kia Sedona (soon to be replaced by the Carnival) and today’s tester, the Toyota Sienna.

Toyota’s sculpted redesign of its 2021 Sienna makes for a more credible sporty variant in the new XSE model. Whether for minivan-hating parents or their children, the Sienna is a big toy box of possibilities, and now a greener choice. 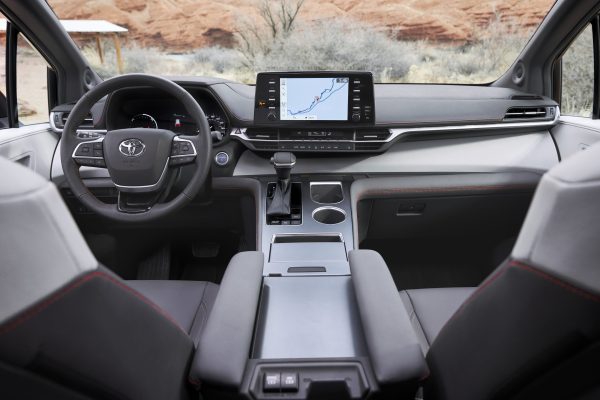 The shifter and necessary functions are all within easy reach, along with cup holders, wireless charger and yet more storage bins for smaller items. (Toyota)

Pricing for the 2021 Toyota Sienna

The first Sienna went on sale in the United States as a 1998 model and is now in its fourth generation. It has been designed, engineered and assembled in the U.S. since it debuted.

The 2021 Toyota Sienna is a complete redesign and exclusively powered as a gasoline-electric hybrid, with optional all-wheel drive and seating for seven or eight. 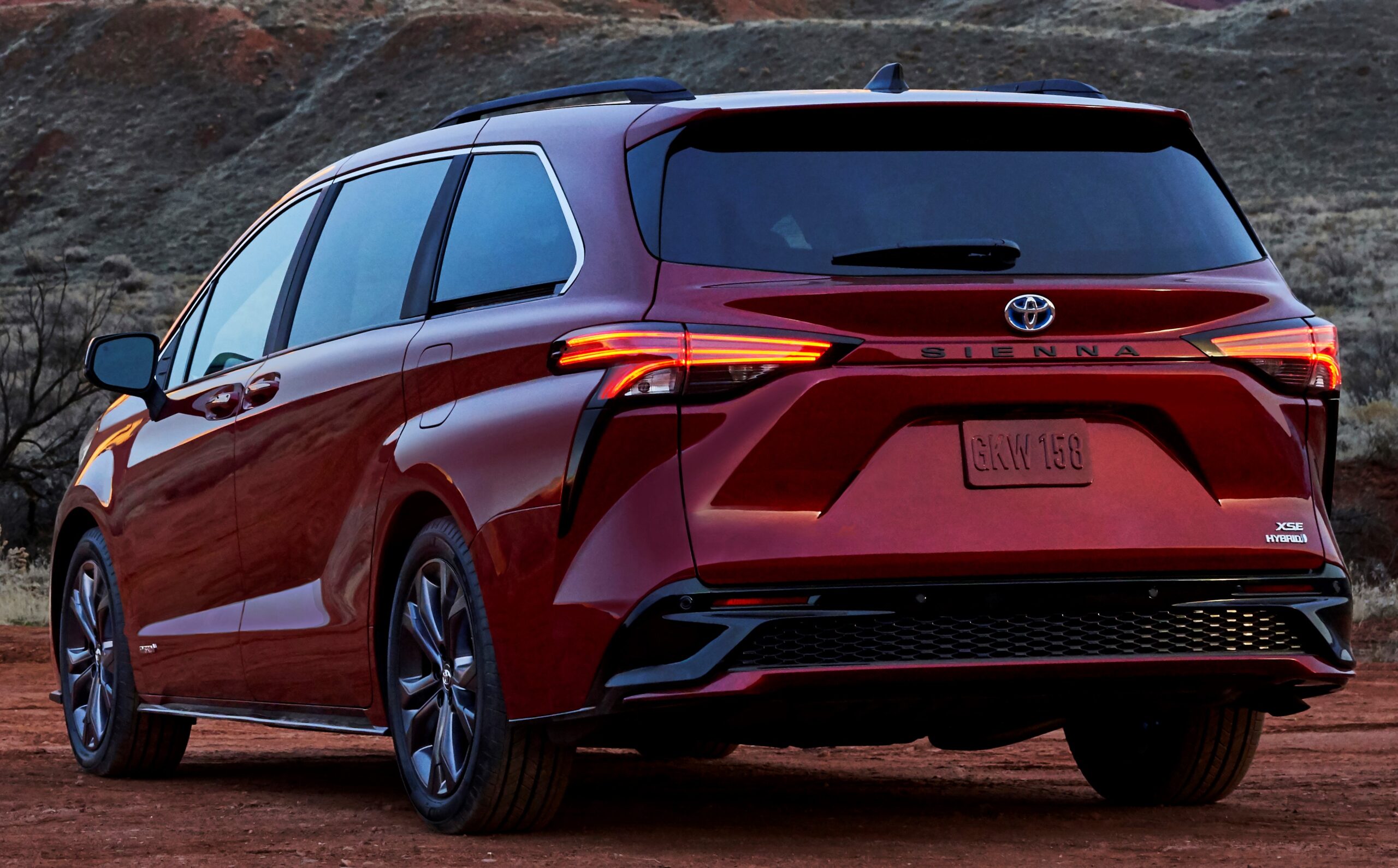 Toyota applied a few styling tricks to tone down the traditional minivan styling. Among them, a “speedy” pillar at the rear cabin is dynamically angled forward. (Toyota)

It is sold in five trim levels of LE, XLE, XSE, Limited and Platinum. Starting prices range from $35,635 for the eight-seat, front-drive LE to $51,710 for the seven-seat Platinum AWD. Pricing includes the $1,175 freight charge from Princeton, Ind. 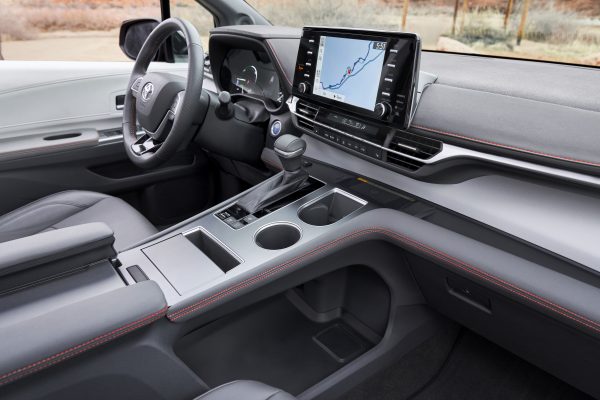 The broad span of the instrument panel has a step-down shelf, handy for the passenger to lay a phone. (Toyota)

Hybrid-related components that require repairs to correct defects in materials or workmanship are covered for 8 years or 100,000 miles from original date of first use when sold as new. The hybrid battery is covered for 10-years/150,000-miles and is transferrable across ownership. 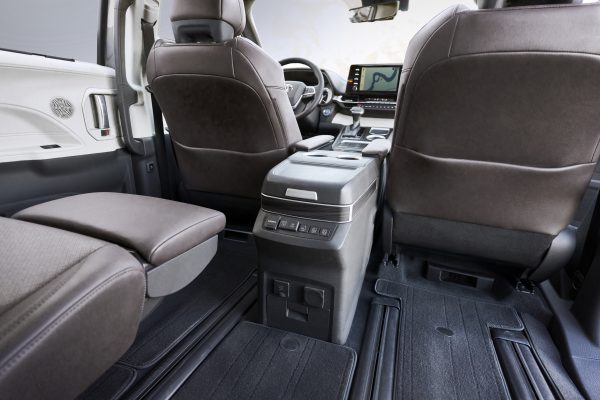 There is nearly 3 feet of NBA legroom provided by the super-long-slide second-row captain’s chairs, which also recline. (Toyota)

Here’s how Toyota tried to take the minivan out of the styling:
• A speedy pillar at the rear cabin is dynamically angled forward;
• Thin bands of LED lighting at the taillight flow from the body to the rear to create a signature impression;
• Integrated black taillight canard looks cool but also improves aerodynamics;
• Sculpted tailgate with an integrated spoiler is made possible by a molded resin process. 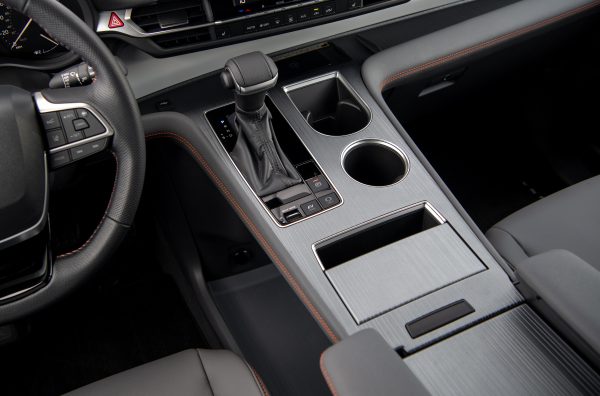 The shift console is cleverly designed to integrate storage and cup holders. (Toyota)

How does the 2021 Toyota Sienna drive?

No tachometer, no wedgie-inducing front seats, no problem.

As a father now graduated from child-rearing years, I always liked testing minivans, and not just because my two charges ran to do homework in the van.

It’s the view from the inside out that mattered — not that I might be judged a “soccer dad,” though my step-daughter was a brutally effective club soccer player.

Ride quality in the XSE is slightly sport-tuned but never harsh or pitchy. There is good driver connectivity between the steering input, braking response and acceleration. 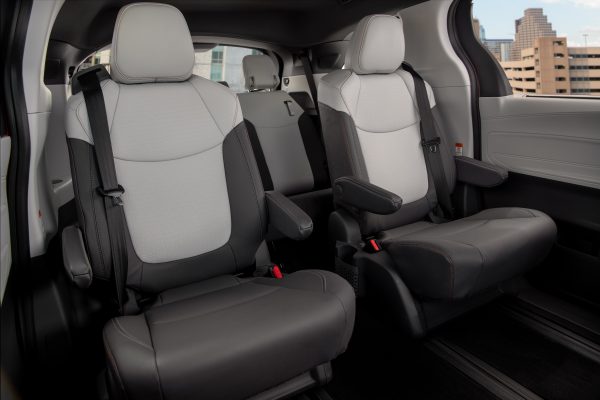 The interior storage opportunities are a vertical ecosystem of tiers, trays and cubbies. In all, there are 18 cup holders and seven USBs. (Toyota)

Despite the Sienna’s 17-foot-length, it drives “small” with a high seating position, low step-in height and big windows, with privacy glass behind the front row. Driver sightlines are open across the hood and over the shoulder and the turning circle is refreshingly modest at 38.2 feet, though you’ll have to swing a little wider when steering into the parking stall. 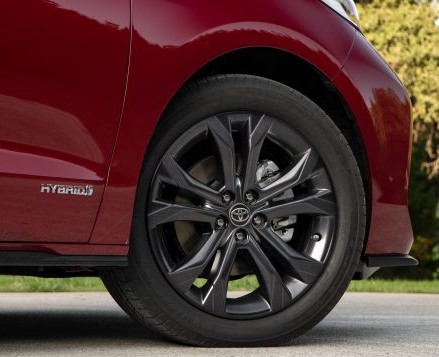 The appearance of the XSE is somewhat sportified by dark 20-inch split five-spoke wheels. (Toyota)

Four-wheel disc brakes work without regen-grab common to some of Toyota other hybrid models. Ventilated discs front and rear are towing capable (up to 3,500 pounds) with 12.9-inch discs front, 12.5 inches rear.

The Toyota Safety Sense (TSS 2.0) system includes a pre-collision system with daytime and low-light vehicle and pedestrian detection, plus daytime bicyclist detection. Automatic braking is activated by PCS if the driver does not react in time in certain emergency situations. The system also can detect a vehicle ahead, a bicyclist or pedestrian in low light situations.

The system capably keeps the car centered in the lane, but like most systems it will randomly shut off, sometimes due to variable light and road-surface conditions. This tpe of safety syystem will be beneficial for those drivers who have daily commutes in heavy traffic. It is an extra six eyes on the road to watch for less attentive drivers. 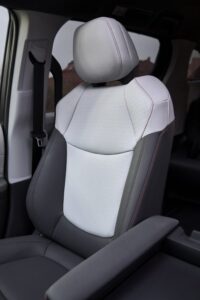 Toyota’s use of a nickel-metal hydride battery pack isn’t as technologically high-powered as a lithium-ion battery pack, but I couldn’t tell a difference, it just works. With  288-volts, the battery pack lets the Sienna roll for blocks on silent battery power at low speeds or creeping in traffic. This is the same well-tested system Toyota has used for years.

With a combined power of 245-hp, there was no lag in launch power and it will cruise comfortably at highway speeds. The electronic continuously variable transmission (eCVT) has a sequential shift mode, but I didn’t feel the need. The CVT kept the power easily controlled under my right foot.

The entire cabin of the 2021 Toyota Sienna is well-soundproofed and quiet rolling with the Michelins.

Interior storage opportunities are a vertical ecosystem of tiers, trays and cubbies. In all, there are seven USBs, six of them for charging, 18 cup holders, onboard Wi-Fi and the optional Driver Easy Speak, which is essentially a built-in PA system that carries the driver’s voice through the audio system to the rear seats — and the source of the disturbance.

The broad span of the instrument panel has a step-down shelf, handy for the passenger to lay a phone and the door panels have spacious bottle storage and a shallow tray. Toyota says the unique Bridge Console is key to allocating personalized space to the driver and front passenger. Positioned high between the driver and passenger, the bridge  connects the instrument panel to the center armrest. Beneath the bridge is a large open area to stow out of sight larger items such as a purse or bag. But the bridge takes away the once-familiar step-through for parents to slip into the back seat for child care or discipline.

The shift console is cleverly designed to integrate storage and cup holders, of which there are four. A cutout for the two smaller cup holders nearest to the driver’s elbow are made dual purpose with a tip-back lid that leaves a 6-inch-wide by 1.24-inch slot for a phone, errand list or note pad. One of the larger cup holders nearest the wireless charging pad and a charging USB also integrates a phone-size slot.

There is deep storage in the armrest console (12 inches to the bottom) with a pair of charging USBs. The space is handy for holding the pair of wireless headphones for the optional rear-seat entertainment system.

Split & Stow third-row seats are cleverly engineered, but it takes a hefty tug to stow or restore the seats. (Mark Maynard)

Back seats and cargo

Kick-activated sliding doors and the back seat step-in height of 18 inches is child-reasonable. There is nearly 3 feet of NBA-class legroom provided by the super-long-slide second-row captain’s chairs, which also recline. Manual sunshades in the second row are assets as are two more charging USBs. 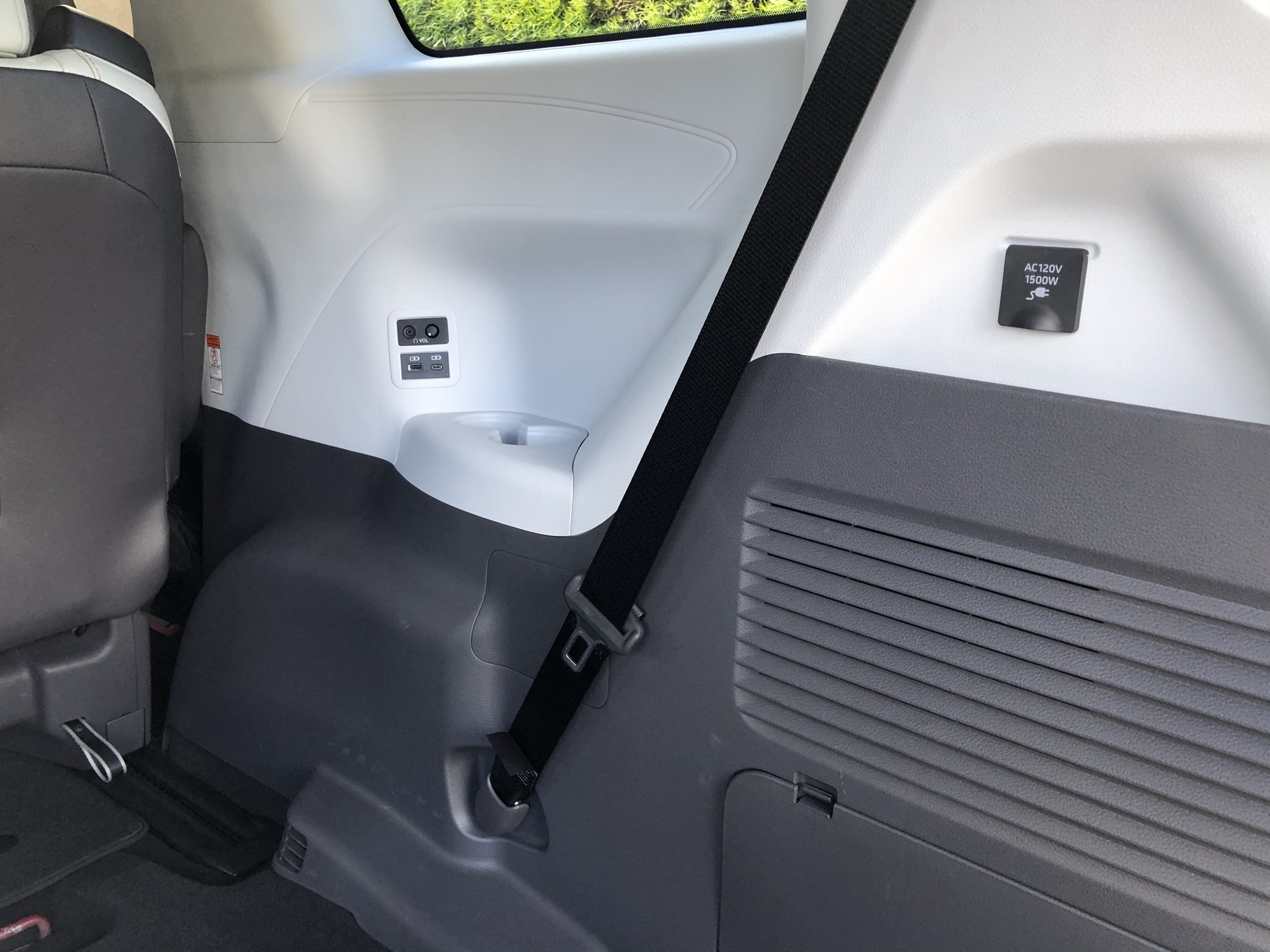 The cargo area has a 1500-watt household power plug, and third row occupants have access to a pair of charging USBs. (Mark Maynard)

And there is another pair of charging USBs in the third row, which is a Split & Stow design. It takes a hefty tug to stow or restore the seats and the flat area when the seats are stowed has no covering so dog crates or other such materials might not ride flat without bolstering.

Adventurers will be able to embrace their nomad lifestyle this fall with the Sienna Woodland Special Edition. Pricing has not been announced but is expected to start at around $45,000, including all-wheel drive and raised suspension.

And with every sale, Toyota will make a $250 donation to the National Environmental Education Foundation. The effort will be a guaranteed minimum donation of $250,000 to support NEEF’s mission to make the environment more accessible, relatable and connected to people’s lives. 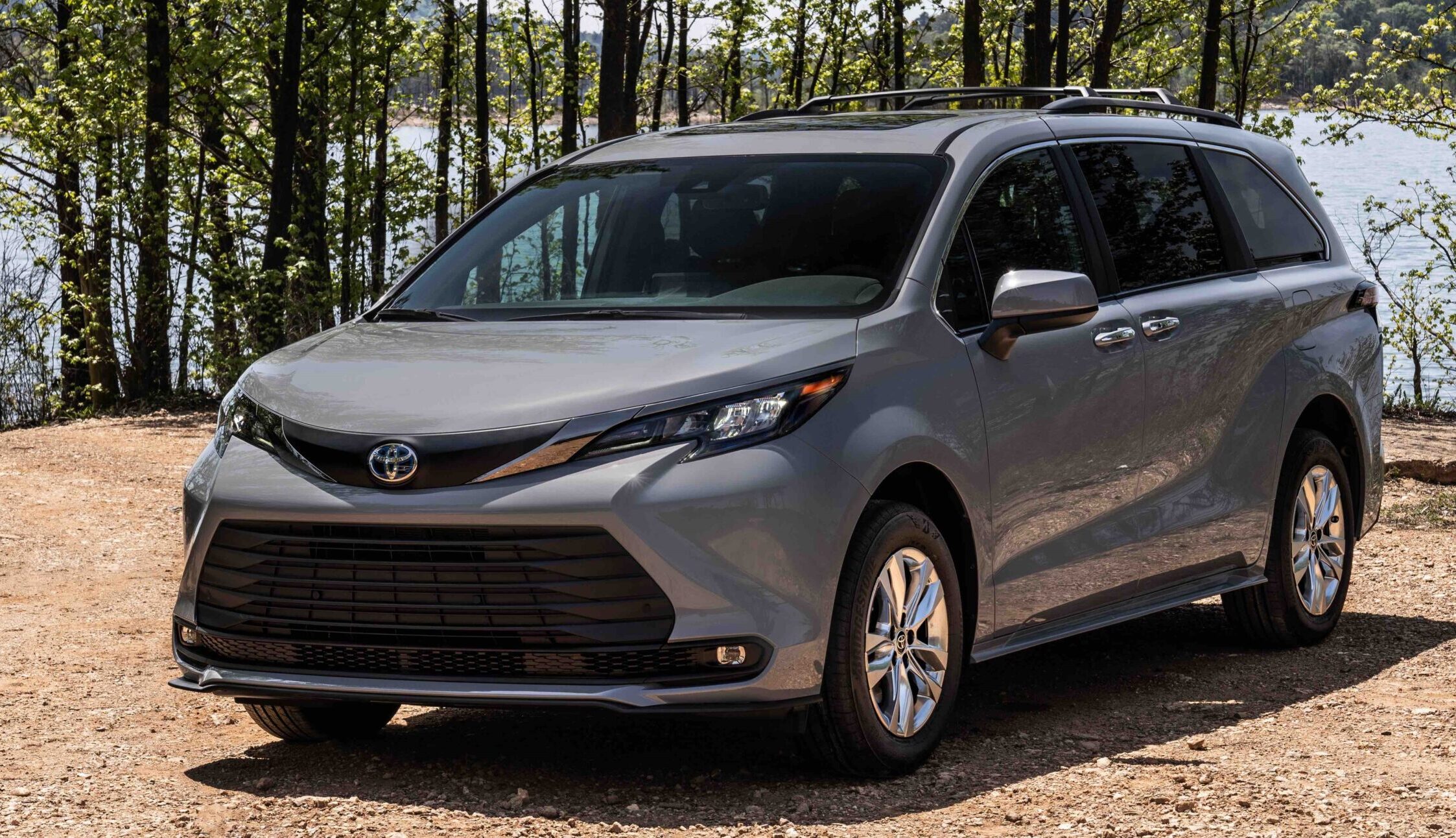 The 2022 Woodland Edition will go on sale in the fall in the exclusive Cement paint color, with standard all-wheel drive and a raised suspension. (Toyota)

With the substantial baggage most drivers drag along with them every day, a rational society might think that a minivan would be a top seller. But minivans are like green vegetables — we know should eat more of them, but for many it is the sexiness of SUV fast food that wins the sale.

The Sienna is a green and very inviting for an extended road trip. My average fuel economy of 28-plus-mpg was impressive, though I never transported a van full of people.

Its exterior styling is attractive and somewhat eye-catching on the road … for a minivan. But it is the inside where this minivan far exceeds any utility of an SUV or its fuel economy or ease of entry — and all that with a tow rating of 3,500 pounds.

END_OF_DOCUMENT_TOKEN_TO_BE_REPLACED

We’ll see about that. #sexy

Toyota throws a 25th anniversary party for the RAV

Hips, haunches and attitude — the four-cylinder

Nino Farina takes the checkered flag in an Alfa Ro

The Art of Engineering: Mercedes-AMG A35 with 302-

The 2022 Infiniti Q50 adds wireless tech and a hig

We’ll see about that. #sexy

Toyota throws a 25th anniversary party for the RAV

Hips, haunches and attitude — the four-cylinder

Nino Farina takes the checkered flag in an Alfa Ro

The Art of Engineering: Mercedes-AMG A35 with 302-

The 2022 Infiniti Q50 adds wireless tech and a hig